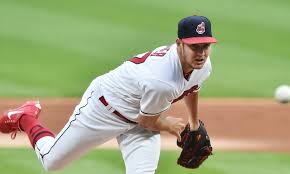 In just a few long days, the 2018 baseball season will finally be upon us. It is at this time that us baseball writers engage in the annual tradition of projections, so that come October, we can rejoice in where we were right, and be target of oh so many cruel, cruel jokes where we were wrong. So, without further ado, here is my projected playoff bracket for the coming season:

That’s right – led by a strong, deep pitching staff, the Cleveland Indians will defeat the Washington Nationals to win the 2018 World Series in five games. My bracket overall is pretty unexciting, mostly just teams from last year. I wouldn’t say that the baseball middle class is disappearing. Plenty of teams will finish with 79 wins or so, but that’s not good enough to make the playoffs. I’m not worried though. I’m sure I’ll be wrong about at least a couple surprise teams who will eek into contention.

Here are my awards picks for the coming season:

I went with the obvious picks twice, with Kershaw and Trout, and I don’t think there will be too much competition comparing to the stats that the two best players in baseball put up. For NL MVP, it was between Freeman and Votto. And, even though Votto will probably have the better season, I think Freeman will get far more attention because poor Votto never gets attention for anything. I could see Freeman putting up a .420 OBP with 40 home runs in the coming year. AL Cy Young was probably the hardest decision, and I nearly flipped a literal coin to chose between Sale and Kluber. In the end, however, I non-randomly chose to give the slight edge to Chris. For NL ROY, I went for a somewhat conventional pick with Acuña, even though he will spend the first 20 or so days of the season in AAA. And, in the AL, I picked Gleyber Torres, a.k.a.

not Shohei Ohtani. I was incredibly high on Torres before his surgery last season, and I don’t see to much reason to dock him now because of it. As for Ohtani, he won’t hit, and while I think he could do well as a pitcher after he gives up his bat, that should take some time. Injury is also a big risk for him. If Torres is upset by somebody, it will be a young pitcher who debuts surprisingly early, like a Whitley or a Kopech.  AL manager was easy because even though I don’t love or hate Servias, I’m picking the Mariners as the only surprise team to make the playoffs (and even that’s not even too surprising). In the NL, I didn’t see any breakout team winning enough games for their manager to muster an award, so I picked Martinez because the Nationals will win the top seed.

Now, finally, is my favorite part of projections: the bold predictions. Bold predictions are not things that I am betting will happen, but rather things that most people won’t consider, but I would see as somewhat likely.

Images Attributed to USA Today, The Associated Press, and NBC