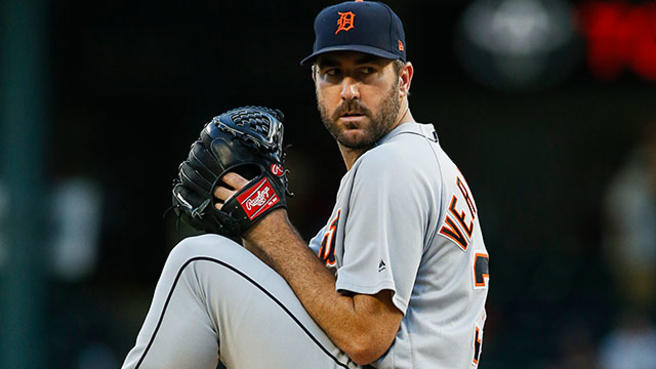 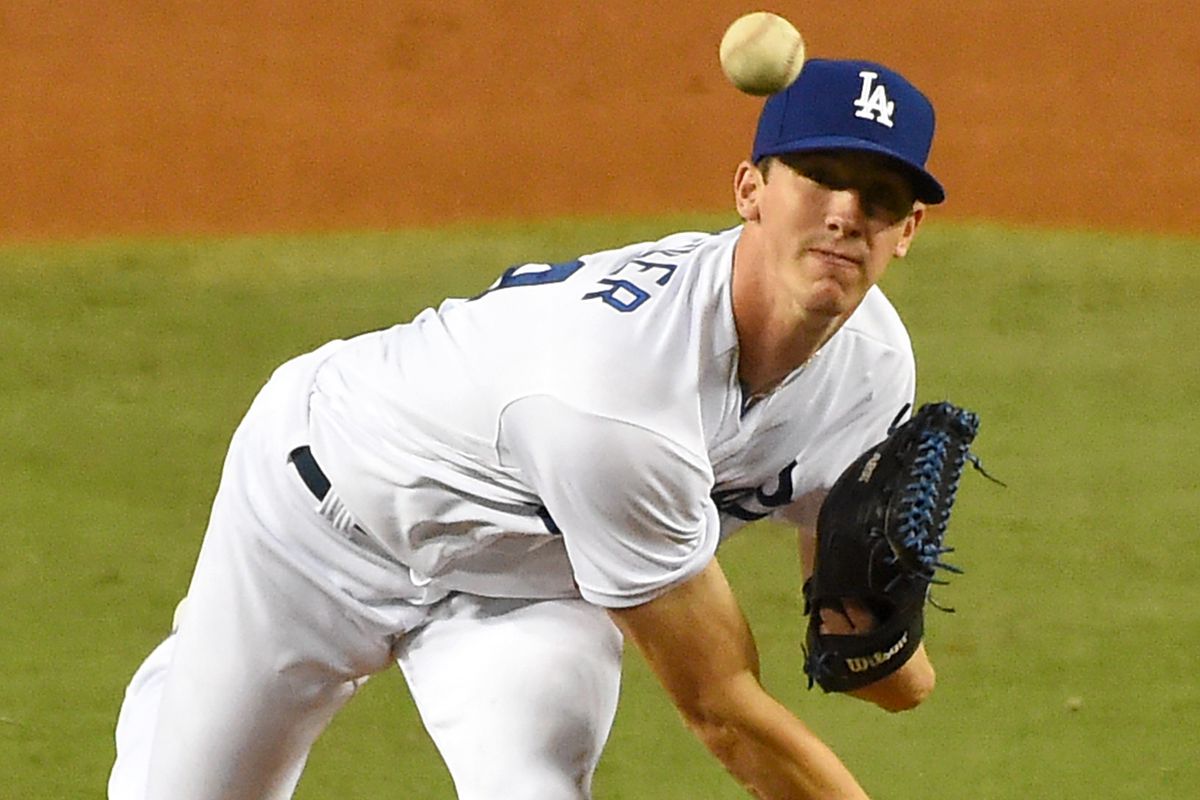 Evaluating the Myth of Postseason Experience, by Ian Joffe

We’ve all heard MLB commentators, especially the old-school ones, complain about a team’s postseason chances because its players‘ lack experience. The idea is that younger or less experienced players (I’ve heard both versions) are more anxious in the postseason, and are therefore more likely to choke on the grand stage. It’s undeniable that there are major psychological effects going on in the postseason. From Clemens to Kershaw (arguably), there are some players who just seem overwhelmed by the bright lights, and no matter how good their regular season was, they collapse when it matters. The questionable part, though, is if this correlates with age or experience. There may just be some players who, no matter their age, cannot figure out the playoffs, or players that may actually improve in October once given a chance to get used to it.

As a 17-year-old, I have always argued in favor of the youth. I don’t think there’s anything about being younger that makes one choke under pressure. A lot of that judgement is based on stereotypes that have little or no basis in hard evidence. Furthermore, one could just as easily put together an argument that youth should be better in the postseason because their energy can match the hype. That’s my problem with a lot of psychological arguments: it’s easy to make one up that will go either way, and they usually take the path more traveled by – that is, they tend to be prone to confirmation bias of stereotypes that most people already believe. Once again, there’s no denying that psychology is a science and that mastery of it can provide a tremendous advantage in sports. But, if it is a science, there must be scientifically gathered evidence for any conclusion to be valid. So that’s what I set out to do; this is my quest for evidence for the myth of postseason experience.

There are four buckets that I looked into to see if experience or age could impact postseason performance: experience for hitters, experience for pitchers, age for hitters, and age for pitchers. According to my numbers, all of which comes from the incredible Lahman Database and I spliced up using Python, 1470 batters have played in the postseason since 2000, which is far back as my data goes. That makes 42,369 plate appearances, or, a pretty good sample. Of those PA’s, 13,997 occurred during a player’s first postseason. The other 28,372 took place during some other nth postseason. The total wOBA (an explanation of which is linked here) of the batters playing in their first postseason was .316. The total wOBA of players in later series is .314. It appears solely based on these numbers that there are no advantages to having experience, and that batters are basically the same in their first and later postseason series. However, the average age (adjusted for their number of PA’s) of batters in their first postseason is 27.6 years old, while the average age of players in later series is 31.4. Here is the basic wOBA aging curve, which I got from fangraphs: 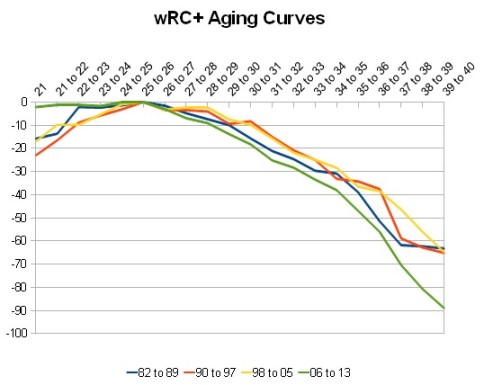 The graphic actually splits up the curve by time period in modern baseball history, which is helpful, but my main point is that a 31-year-old is expected to have a wRC+ about 10 points lower than a 28-year-old. That translates to a 10% difference in wOBA, meaning if we adjust the 28-year-old to 31-year-old status, the 28-year-old actually has a wOBA around .284, significantly lower than that of the 31-year old. So, that would suggest that actually, experience plays a large role in postseason performance.

Let’s look at a progression now, rather than just a player’s first postseason vs. later postseason. For the sake of sample size, I grouped players by sets of two series of postseason experience, so there’s a group with 0-2 series, a group with 2-4 series, and groups all the way up to 9+ series. Here are all the wOBA numbers from each individual:

On the x-axis is years of experience, and on the y-axis is wOBA. Each dot is an individual in one series, and the red line is the average wOBA (weighted, of course for their number of PA’s). There are obviously a lot of outliers and a lot small samples there, so let’s zoom in on the red line. 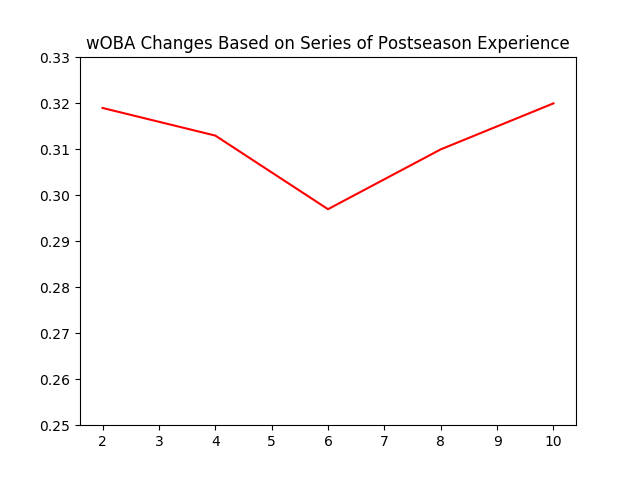 Once again, it appears there is a strong possibility that experience helps players in the postseason. There are two potential competing forces that make up this almost parabolic progression. The aging curve (which we know is a factor) pushes a player’s wOBA down, while experience (which we don’t know is a factor – that’s what’s being tested) may push a player’s wOBA up. Based on the graph, it looks like the power of the aging curve starts out more influential than experience, but after a player’s 6th postseason series or so, they reach a threshold where that pattern reverses. Suddenly, it appears that experience matters so much that it reverses aging in the postseason, which is actually supposed to accelerate as one gets older. Don’t underestimate the gravity of that conclusion; according to it, the power of postseason experience can, at some point, reverse natural aging in the batter’s box. So, from the data we have collected on hitters, it seems that experience may actually be a notable factor in postseason performance.

Now let’s look at pitchers. My data holds 10,276.1 total innings from 652 pitchers. A whole 8160 of those occurred in that pitcher’s first postseason, while the other 2,116.1 innings took place in later postseasons. The FIP of pitchers in their first postseson is 3.91. That number goes down in later postseasons, to 3.82. Age, obviously, went in the other direction, up from 28.7 to 33.8. Here’s the pitcher aging curve, from . Focus on FIP, as that’s the stat that I will use. 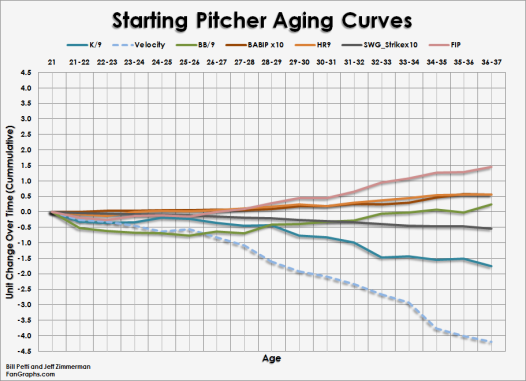 FIP increases by about 10% between those two ages, adjusting the 3.82 all the way up to 4.30, which is not even close to 3.82. This analysis, like the one with hitters, suggests that pitchers do get better with postseason experience. We can look at it progressively, too. I didn’t make the graph with all the individual dots this time, as it didn’t really show us anything last time.

This looks similar to the graph for batters, but the threshold at which the benefits of experience take over the drawbacks of old age seems to be even earlier, around the pitcher’s 4th series. From this data, it seems like both hitters and pitchers are positively effected by postseason experience.

So, based on all that, it appears there is strong evidence that experience is a factor in the postseason. Now let’s look at age. Keeping in mind the regular season aging curves that have already been presented (treat those like a control group), this is how hitters and pitchers progressed as they aged in the postseason. 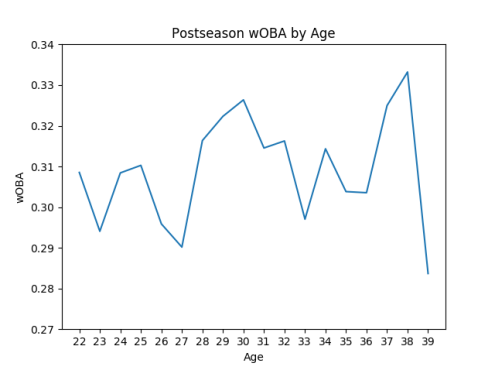 Despite the large samples, the postseason aging curves for batters and hurlers alike appear to be almost random, jolting up and down at unpredictable times. It doesn’t go directly down like it’s supposed to, but at the same time, it doesn’t go up, nor does it start going down and then go up. Every researcher hates to say it, but these charts are inconclusive. There’s no way of saying that age does or does not affect postseason play based on provided data.

Overall, my attempt to defend youth is probably not accurate as the data does suggest that players improve in the postseason with experience. It is possible that other factors contributed to those results. For example, strong young players can be brought up by any team, but good, older free agents are usually (see: Hosmer, Eric) only signed by teams that are already in postseason contention. However, if that were the sole factor in this correlation, there would be a pattern in the age chart too, which there is not. So, in conclusion, while it does not appear there is any correlation between older age and better postseason performance, I will no longer be calling foul when experience is cited as a factor in evaluating teams for a world series run. The evidence is here.

10 Replies to “Evaluating the Myth of Postseason Experience”