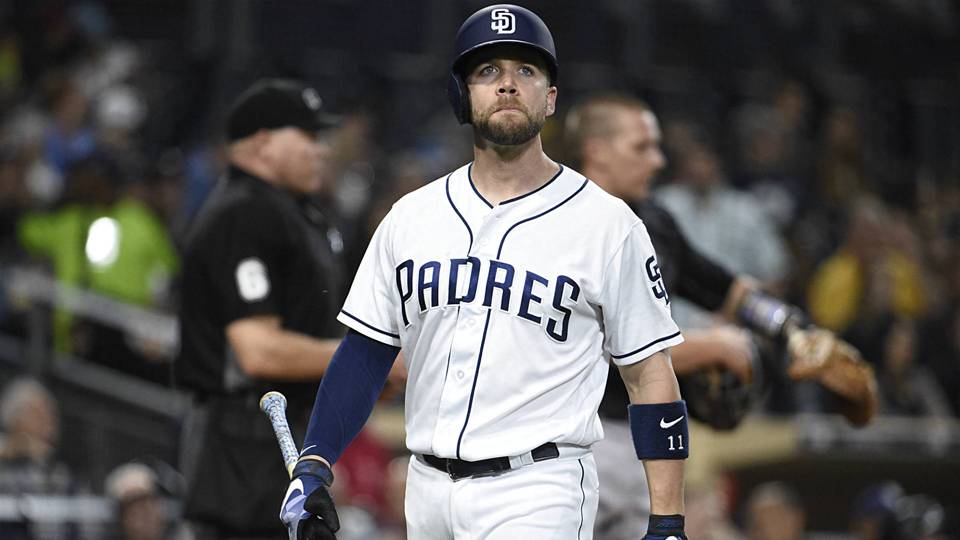 The Mysterious Case of Ryan Schimpf by Mojo Hill

By now, most hardcore baseball fans have heard about Joey Gallo and how he is already having one of the strangest MLB careers of all time. Gallo, the man who has more career home runs than singles and has a career batting line of .203/.317/.498. No other qualified player in the history of baseball has ever had an average under .205 while maintaining an OPS over .600. And not only is his OPS above .600, but it’s actually a very good .815. And he does it with a 38% strikeout rate. Amazing. And Gallo, who has one of the highest fly ball rates in baseball, has never hit a sac fly. Hard to believe, right?

I present to you the man, the myth, the legend: the one and only Ryan Schimpf, who would probably have a lot to talk about if he were to have lunch with Joey Gallo. Schimpf is a lot like Gallo, but arguably even more extreme. In case you’ve never heard of Schimpf, allow me to enlighten you.

Unlike Gallo, Schimpf is not an everyday MLB player, which is why he is not known nearly as well and doesn’t have as many MLB plate appearances. But Schimpf’s sample size is still large enough (534 plate appearances) that we can have some fun looking at the numbers.

Schimpf made his MLB debut for the Padres in 2016 after spending seven years in the Blue Jays organization. When San Diego called him up for the first time at the age of 28, he was murdering Triple-A pitching to the tune of a monstrous 201 wRC+ and .373 ISO. And he hit well in his debut season, which turned out to be his most successful season to date (so far). Recording 330 plate appearances over 89 games, the second and third baseman batted .217/.336/.533, good for a 128 wRC+ and 2.5 fWAR.

After 2017, Schimpf was shuffled around a bit. After being traded to the Rays in the offseason for minor league shortstop Deion Tansel, he was designated for assignment and traded to Braves for cash in early March. Then on March 31, he was traded again, this time to the Angels for catcher Carlos Perez.

Schimpf only played five games for the Angels last year, going 1-5 with two walks and a home run. He was released in May after hitting a very underwhelming .178/.288/.355 in 30 games for the Salt Lake City Bees.

What fascinates me is how his value is being perceived by Major League clubs. Clearly, they are not very high on this guy. He had a solid minor league track record for the Blue Jays, yet they never promoted him to the big leagues. It took a monstrous season for the El Paso Chihuahuas for the Padres to finally give him his chance at age 28. He’s been thrown around in multiple trades, and each time he’s essentially been traded for peanuts or just straight up released.

In fact, among all hitters in MLB history with at least 500 plate appearances, Schimpf’s .300 ISO is the foruth best of all time, behind only Babe Ruth, Mark McGwire, and Barry Bonds.

Think about that. He’s hit for more power on a rate basis than sluggers such as David Ortiz, Alex Rodriguez, and Mickey Mantle, just to name a few. He may not put the ball in play often, but man when he does, he hits it really, really hard. Hey, and you know who’s fifth on that list? Joey Gallo, of course.

Despite his obvious flaws, Schimpf is a valuable hitter. The walks and power make up for the low average and high strikeout rate, just like in the case of Gallo. Gallo’s career wRC+ is 109, and the Rangers have granted him a starting role over the last two seasons. In each of those seasons, he’s hit for a 121 and 110 wRC+, respectively, with exactly 2.8 fWAR in each year. Schimpf’s wRC+ is 114, and he even has more defensive value being a second and third baseman as opposed to Gallo, who the Rangers announced will no longer be playing third base and will stick to first base going forward. Yet Schimpf can’t find a Major League job, and Gallo can.

Some teams will look at the .195 batting average and shudder. But come on. We’re in 2019 now. This new age of analytics has taught us that batting average is a mostly meaningless tool in terms of evaluating a player’s actual offensive production and value. Getting on base and hitting for power, and Schimpf does both those things in spite of his low average. The Rangers have accepted and even embraced this three-true-outcomes characteristic with Gallo, and it’s about time for other teams to realize the same with Schimpf.

Now, there are some things going against Schimpf. He is already 30 years old, as opposed to Gallo who is still just 25. Schimpf took forever to receive a promotion to the Majors, and despite a solid fifth round selection, was never regarded that highly as a prospect. He’s simply someone that scouts have doubted for his entire career because of all the strikeouts and pop-ups.

And in today’s day and age, when players are hitting home runs and striking out more than ever, guys with power and not much else aren’t being valued that highly since power has become a more common skill around the league. This is especially true for the one-dimensional first base/DH types, who are struggling to even get Major League deals at this point. While Schimpf isn’t a great defender by any means, he does at least play a passable second and third base, which boosts his value a little bit. But even in this new age of analytics when people are starting to look beyond batting average to value hitters (as they should), Schimpf’s one-dimensional toolset as well as his age and lack of fanfare are hurting him.

Still, he’s a 30-year-old infielder with pop, so he definitely has some baseball left in him and I would be stunned if he didn’t pick up at least a minor league deal.

Oh, and one last fun (or depressing) tidbit about Schimpf. Schimpf is the proud owner of one of the worst Spring Training performances in MLB history. Before the 2018 season while he was playing for a spot on the Braves’ Opening Day roster, he went 0-30 with a whopping 19 strikeouts. Yep, you read that correctly. Wow. Maybe that’s why teams don’t like him.

Seriously, though, Schimpf is a baseball player with undeniable flaws in his game, but also some admirable qualities that I think are being severely undervalued by teams. I don’t think teams realize just how much power he actually has. And with his value at a low point right now, I believe that any MLB team should be willing to give him a look on a low-risk minor league contract, especially a team in need of quality infield depth.

5 Replies to “The Mysterious Case of Ryan Schimpf”